We have published a wide variety of trademark information on this trademark blog page. We hope that you find the information useful. However, if you have a trademark legal issue, the pages located on this website are no substitute for competent legal advice. Please send us an email, fill-out our contact form, or give one of our trademark attorneys a call. If you need to register a trademark with the USPTO or have a trademark issue, we can assist! 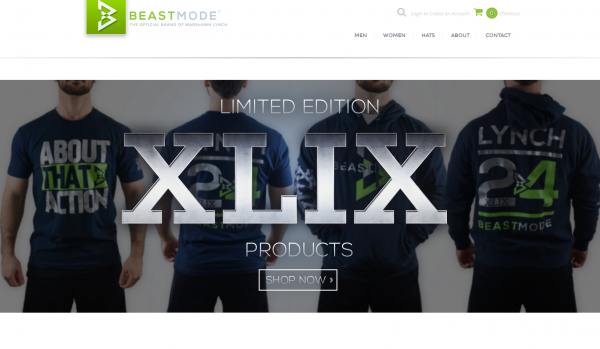 There is no doubt Marshawn Lynch is profiting greatly off of his Beast Mode apparel line.   He is a branding genius. Even if you don’t know who Marshawn Lynch is you have probably heard the phrase “I’m just here so I won’t get fined.” Lynch is the running back for the Seahawks as well as the registered trademark owner of “Beast Mode” product line featuring shirts, hats, beanies, hoodies, and other related products.  According to the USPTO website and the U.S. Trademark Electronic Search System, Lynch filed his trademark application for the “Beast Mode” trademark on September 9, 2013, and was approved by the USPTO examining attorney for publication on February 15, 2015. He didn’t stop there. After he bluntly and repeatedly told media “I’m just here so I won’t get fined,” on Super Bowl Media Day in late January, and after his statement went viral, he made a lucrative business decision and filed a trademark application with the USPTO. Although many criticize his statement, others love it and have been asking for clothing with that phrase. He is giving his fans what they want as well as making a smart decision by filing for a trademark application in hopes of protecting his intellectual property.

On February 18, 2015, Lynch applied for the word mark “I’M JUST HERE SO I WONT GET FINED”  under the International  Class 025, identified as goods and/or services related to athletic shirts, baseball caps, beanies, fleece pullovers, hooded pullovers, hooded sweat shirts, pullovers, short or long sleeved t-shirts, sweat shirts, and track jackets. Lynch will be assigned to a USPTO examining attorney in approximately 3 months whom will likely approve the trademark registration.

Celebrities’ applying for trademark protection for their famous phrases is not a new phenomenon. Among these celebrities turning to the USPTO are Taylor Swift, Paris Hilton, Donald Trump, Rachel Zoe, JWoww, and Tim Tebow.  Beyonce and Jay-Z successfully registered their daughter’s name “Blue Ivy Carter” after her birth and list Beyonce’s company, BKG, as the trademark owner.