is seen as a form of unfair competition.  In an unfair competition claim, an individual or business must be able to show, at a minimum, that another individual or business is using a trademark under circumstances where the public is likely to become confused or deceived. While unfair competition is not codified in a statutory sense, it has been recognized as a cause of action by the courts. Additionally, some states have passed deceptive business practices acts to protect against unfair business practices. There is not a strict definition of “unfair competition,” but it contains a wide variety of unfair or deceptive business practices. The North Carolina Supreme Court said that the test lies in the answer to the following: “Has plaintiff’s legitimate business been damaged through acts of the defendant’s which a court of equity would consider unfair?” This question can be posed a different way: “Is the defendant’s trademark likely to cause confusion or mistake, or to deceive purchasers as to the source of the product?” However, courts frequently do not distinguish between the two questions if there is solely an unfair competition claim or a trademark infringement claim.

Many policy concepts have helped form guidelines to unfair competition. Some of these policies include:

Since there is no strict statutory definition of unfair competition, the laws and rulings of the court can be a flexible legal tool that allows judicial relief to new and unheard of situations. In order to establish a claim of unfair competition in the trademark context, an individual or business must be able to show, at a minimum, that another individual or business is using your trademark under circumstances where the public is likely to become confused or deceived. 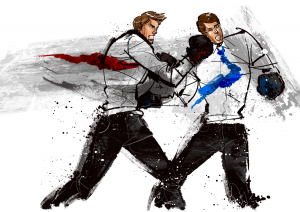 Another example of common law unfair competition is misappropriation, which involves the unauthorized use of intangible assets not protected by trademark or copyright laws. Misappropriation is the principle that one may not misappropriate the results of the skill, expenditure and labors of a competitor.  Most state recognize a common law claim for misappropriation, even though it is not codified.

Several states have codified some form of Consumer Fraud Act. Illinois is one state that has done so, codified at 815 ILCS 505/1 as the Consumer Fraud & Deceptive Practices Act (CFA). The CFA make unlawful unfair or deceptive acts or practices which take place “in the conduct of any trade or commerce” The act is defined broadly, covering transactions in services, goods & property.

Unlawful practices are defined in the code as deception, fraud, false pretense, false promise, misrepresentation, concealment, omission of material fact, with intent that others rely on the concealment or omission. A material fact is one where a person would have acted differently knowing the correct information or which concerns the type of information upon which a person would be expected to rely on making a decision.

Consumers do not need to show intent to deceive; a violation may be based on innocent or negligent misrepresentation. However, only people who suffer actual damages as a result of the misappropriation can bring an action under the act. Thus, to state a claim, a consumer must prove reliance on the misrepresentation.

The purpose of the UDTPA is to prevent dishonest businesses from doing injury to those honest businesses competing in their markets. Injunctive relief is available to protect individual consumers, where they are likely to be damaged in the future by a deceptive trade practice of another. No damages remedy is available under the UDTPA, but damages for violations of the UDTPA are available under the CFA. To prevail under the UDTPA, a plaintiff need not prove monetary damage, intent to deceive, or even actual confusion or misunderstanding. The prevailing plaintiff may be awarded costs and attorneys fees, but only if the court finds that the defendant willfully engaged in a deceptive trade practice.

A person engages in a deceptive trade practice (trademark infringement) when, in the course of his business, he: