We have published a wide variety of trademark information on this trademark blog page. We hope that you find the information useful. However, if you have a trademark legal issue, the pages located on this website are no substitute for competent legal advice. Please send us an email, fill-out our contact form, or give one of our trademark attorneys a call. If you need to register a trademark with the USPTO or have a trademark issue, we can assist!

Even the all powerful BCS can be issued a trademark refusal.  The inauguration of the College Football Playoffs will occur without a registered trademark in place.  BCS Properties, LLC, the trademark applicant, will be unable to reap the immensely valuable benefits garnered by federal trademark registration.  BCS’s trademark attorney submitted multiple trademark applications (word mark, design mark, design plus words, letters, and/or numbers mark)  in the following trademark classes: 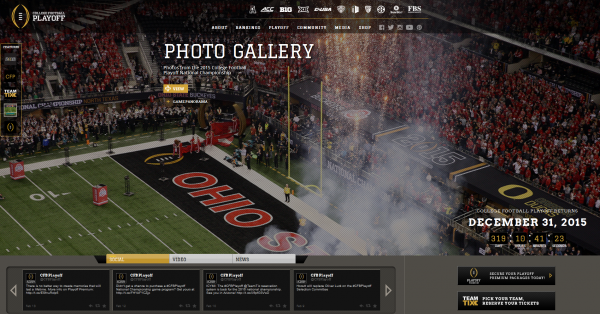 BCS Properties, LLC has filed six trademark applications with the U.S. Patent and Trademark Office (“USPTO”) for federal trademark protection of the “COLLEGE FOOTBALL PLAYOFF” mark.  In July 2013, the examining attorney issued a trademark refusal to BCS on the basis that the trademark applied for simply serves as a description of services the BCS wants to provide. The examining attorney noted that the individual words comprising the word mark still retain their descriptive meaning, even when used in conjunction with one another.  The examining attorney’s refusal letter to the BCS said that the combination of these three words, College Football Playoff, “merely describe a series of college football games to determine a champion.”  Descriptiveness (descriptive trademark) can be a bar to federal registration of a trademark unless the descriptive term has acquired secondary meaning in the marketplace.  There is also concern that the trademark is generic (generic trademark), which can also be a bar to federal trademark registration.

In January 2014, BCS responded to the examining attorney’s trademark refusal by saying that “College Football Playoff” is a suggestive trademark which has acquired distinctiveness among the demographic it is to serve (secondary meaning).  BCS argued that the combination of “College,” “Football,” “Playoff” creates a suggestive mark and that BCS was first to create the coined term; therefore, consumers have not encountered the College Football Playoff trademark prior to BCS’s use in connection with its services.  This, it argued, makes the mark suggestive.  As of February 2014, the examining attorney maintained its refusal of the trademark. On August 6, 2014, BCS Properties submitted another argument in support of the trademark’s registration and on August 26, the examining attorney again rejected the argument with a final action refusing registration because the mark is merely descriptive of the offered services.

The examining attorney does not recognize that the mark has achieved distinctiveness in the marketplace; but rather believes that the evidence provided by BCS shows that its use simply describes (merely descriptive) a series of college football games to determine a champion. The Applicant now has until February 26, 2015 to respond to the USPTO’s latest rejection. The Intellectual Property and Trademark Law and Sports Law fields are anxiously waiting to see how the USPTO will come down on the issues of descriptiveness and genericness with regard to the College Football Playoff trademarks.